The award honours both their farming business practices and community involvement. The below families will be honoured at the Farm Family Awards Gala at Farmfair International 2021 and will be presented with their commemorative gate sign.

J & C Sheldon Ranch
Jim & Cheryl Sheldon own a beef cow/calf operation in the Kinuso area with the help of their son Brent. They took over operations of the family farm in 1972 from Jim’s grandparents & uncle. Jim & Cheryl are both heavily involved in their community, volunteering for the agricultural society, 4-H, local rodeos, and the Swan Valley Cemetery. Their farm is often the host for school field trips, with over 250 kids having the opportunity to ride a favorite horse, “Itchy”. Cheryl is a member of the Swan River First Nation and has extensive volunteer and career involvement with the indigenous community.  She also served as an elected Public Member for the University of Alberta Senate. 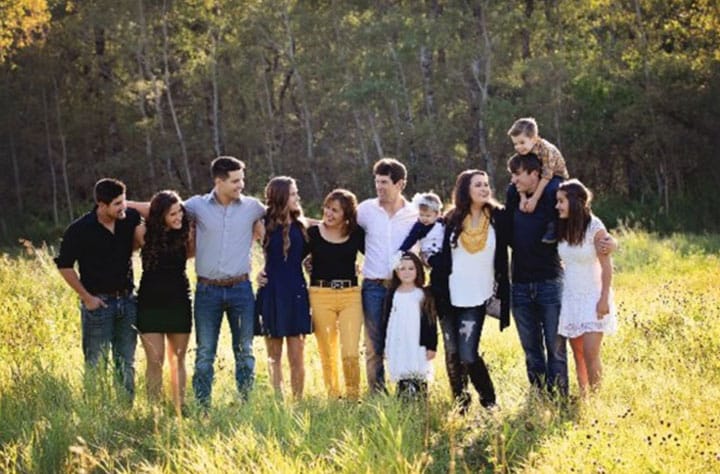 Antoniuk Farms
Brothers Roger & Ken farm near Bonnyville with Roger’s son Kurtis. Antoniuk Farms was established in 1940 when Roger’s & Ken’s grandparents immigrated to the area from the Ukraine. The farm was passed on to Roger and Ken in the late 1980’s when their father and uncle retired. Today, the operation consists of 6500 acres of crop land, 1000 acres of forage, 350 cow/calf pairs, and 500 head of feedlot yearlings. The family’s community involvement includes many years as a board member for the seed cleaning plant, Foodgrains Bank, church board membership, Cancer Society fundraising, several sporting events, Haying in the 30’s, Bonnyville Opry, and the Association Canadienne-Française de l’Alberta. 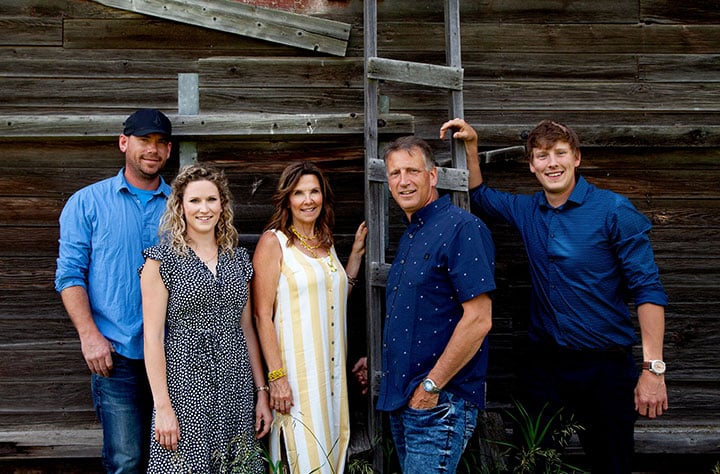 CENTURY 12 FARMS LTD.
Century 12 Farms Ltd. is owned and operated by Roger and Heather Chevraux. They farm in partnership with Chevraux Farms Inc., owned by Roger’s parents, Stan and Sharleen Chevraux, and with their youngest son, Derek. Their 5000-acre grain and oilseed operation, located near Killam, began as a half section in 1912 when the family moved to the area from Kansas. All family members are dedicated community volunteers with involvement in the Killam Gun Club, Iron Creek Flying Club, Killam Hospital Foundation, and the Killam Lions Club. All 3 of their children have been involved in many sports over the years, as both participants and coaches. Roger is on the Boards of both Alberta Canola Growers Association and the Canadian Canola Growers Association. The Chevraux Family were also recipients of the Alberta Century Farm Award in 2012. Roger and Heather are honoured to receive this award. 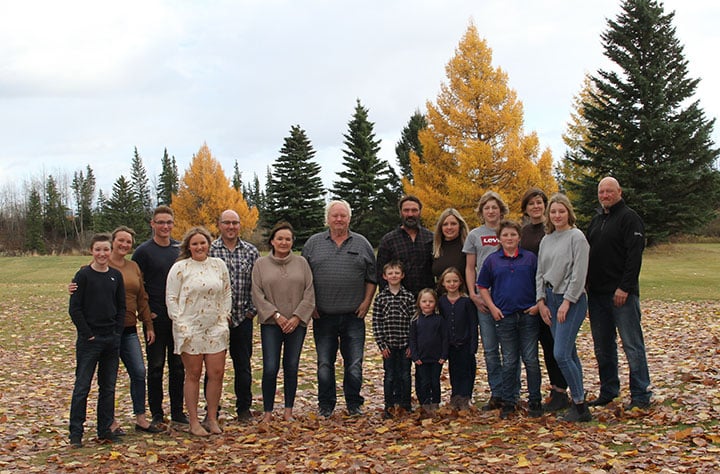 HALCOURT LAND & CATTLE COMPANY
Halcourt Land & Cattle Company is owned and operated by Gary & Daphne Ray, their son and daughter-in-law Josh & Catherine, and daughter & son-in-law Chelsea & Don. The operation, located in the Halcourt area near Beaverlodge, includes 5000 acres in mixed grain and 700 cow/calf pairs. Their family has farmed in the area since 1911. Gary is heavily involved with industry groups such as the Beaverlodge Soil Conservation Society and the South Peace Forage Association. Various family members volunteer with youth groups such as Beaverlodge Minor Hockey, minor soccer, 4-H, dance, and daycare. They also enjoy participating in the annual Beaverlodge Summer Agri-Fair parade.

Robert & Darcie Steffler farm near Onoway with their children Logan, Lane, & Amanda. Their land was first farmed by Robert’s great grandfather, making their children the 5th generation to farm here. They run a mixed operation with 1100 acres in grain, 400 acres in hay, and 200 cow/calf pairs. Darcie works as a Veterinary Technologist and has served as a council member for the Alberta Veterinary Medical Association and received numerous awards from the AVMA. Amanda recently started her own purebred Simmental herd and has been a been an Alberta board member for the Canadian Young Simmental Association. All family members were active in the 4-H program and continue to volunteer with the organization.

HOFSTRA FARMS
Hofstra Farms, located near Millet, is owned and operated by Tim & Debbie Hofstra and their daughter & son-in-law, Heidi & Arjan. The farm consists of 280 dairy cows (including 85 in milk), 1900 acres in cropland, and a 60 head beef cow herd. Tim is involved with the Agrifoods International Cooperative, Westgen, Bow Valley Genetics, Wetaskiwin Co-op, and the Edmonton International Airport Authority. Debbie serves as the Chair of the Chamber of Commerce Agriculture Committee. Arjan volunteers with the Northern Alberta Holstein Club and the Cloverlawn Community Center, while Heidi is the Leader of the Rollyview 4-H Dairy Club. The Hofstras have received the Alberta Milk Quality Award for 13 of the past 15 years.

FOWLER FARMS
Darryl & Stacy Fowler farm near Innisfree with their sons, Austyn & Conrad. The land was first purchased by the Fowler Family in 1926 and now consists of 2000 acres and 250 head of cattle. Darryl served on the board of the local seed cleaning plant for 10 years and is currently a board member with the Minburn Community Pasture and the Minco Gas Board. Stacy now sits as a member of the Innisfree Hall Board and was a school board member for 14 years. Austyn studied Agribusiness at Lakeland College and Conrad is finishing up his studies as an Electrician. They enjoy curling, golfing, quading, camping, and playing ball together as a family.

The Kuester family’s farm consists of over 1100 acres in owned and rented land and 300 cow/calf pairs. Located near Dixonville, Jason & Amber farm with the assistance of their young children- Hayez, Gage, & Sydney. They are avid volunteers in their community including involvement with the agricultural society, school parent council, cemetery board, curling club and coaching the soccer team. The family also volunteers to maintain the local community hall, campground, skating rink, and curling rink. The kids are busy with soccer, boxing, and Girl Guides and have recently joined 4-H and started their own herds. The Kuester family was instrumental in re-launching the 4-H program in the area as the club had become inactive in previous years.

HUK FAMILY FARM
Edward & Tammy Huk farm with their children Jenna & Gregory near Vilna. The farm was first established in 1924 when Edward’s grandfather, John, immigrated to the area from the Ukraine. He was followed by his wife Catherine and their children five years later. Edward took over the farm from his parents, Harry & Mary, in 1988. Today, the Huk Family run a mixed operation with 500 cow/calf pairs on 3000 acres. Gregory & Jenna have taken on most of the farming operation with guidance from their parents. The entire family is very involved with the Spedden Ukrainian Orthodox Church, with Edward serving as the Vice President. They enjoy quading, hunting, and spending time outdoors together.

NORTHBANK POTATO FARMS
Brothers Kevin & Keith Goutbeck and their cousin Russ van Boom own and operate Northbank Potato Farms with their fathers, Cecil & Ernie. The farm, first established as a mixed operation in 1963 by their grandfather, now produces potatoes and grain on 5000 acres. Russ serves as the Chairman for the Alberta Potato Growers and is a Sunday School teacher and Deacon at Crestwood Presbyterian Church. Keith is a director for “Grow Hope”, the local chapter of the Foodgrains Bank and is on the executive of Avenue CRL Church. Kevin is a director of Edmonton Potato Growers.  Northbank Potato Farms was awarded the Sturgeon County 2019 Excellence in Agriculture Award for their dedication to environmental leadership and innovation.

ZAJIC FARMS LTD.
Ryan & Kathy Zajic own and operate Zajic Farms Ltd near Wainwright. The operation produces grain and oilseeds on over 6600 acres of owned and rented land. Together with their daughters Hannah, Ryley, & Livia, they have run Zajic Corn Maze for over six years. In 2019 alone, 5000 people entered the corn maze raising $13,500 for the Wainwright Handivan and donating 6000 lbs of food to the Wainwright Food Bank. Ryan serves as a review member for the Alberta Environmental Farm Plan Committee. Kathy is a board member for the Edgerton Arena and regularly volunteers as a coach or manager for their kids’ hockey and ball teams.

BLUE RIDGE FARMS
Blue Ridge Farms is owned and operated by Brett & Jillian Byers. In partnership with Brett’s parents, Les & Lois, they raise 400 cow/calf pairs on 2000 acres near Blue Ridge. In 2016, they started marketing their beef through farmers markets and opened their own storefront on the farm in the summer of 2020. Through their storefront, they not only sell their own meat and eggs but act as a co-operative for other producers to sell vegetables, honey, and bread. When not busy running the farm and raising their three small children Ellery, Cohen, and Branson, Brett and Jillian volunteer for the Blue Ridge Community League, River Valley Pony Club, and the West Central Forage Association.