The “Champion of the World” Competition was founded in 2012 to promote awareness, goodwill and trade between and within cattle producing countries. In 2020, there were over 1800 entries entered representing 85 countries featuring 16 breeds.

Although this awarding of World Champions is not scientific, it requires animals to be bred well, fed well, fitted well, and photographed well. The initial qualification of being a country’s premier Breed Champion ensures that it’s only quality that enters the competition. 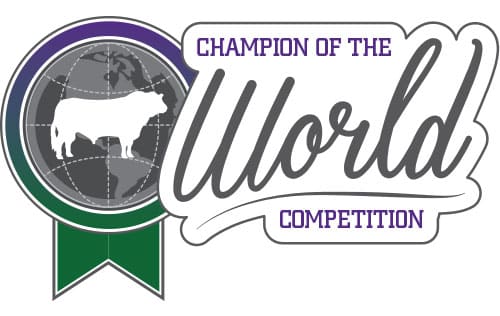 Angus – Champion of the World

Farm: LOUMOTTA STUD
Animal: LEC 17 39 LOUMOTTA CARAMIA
Animal Owned By: Loutjie & Wilru Campher
Breed: Charolais
Category: Charolais – Miss World
Country: South Africa
Bio: Loutjie Campher and his son, Wilru, are the 5th and 6th generation on the farm, Roodekop. They have been breeding Angus cattle and SA Meat merino sheep since the 80’s. The Charolais herd was started after the drought of 2015/2016 when they bought the well-known Riccor-herd to regain cattle numbers. Besides the purebred operation they also plant maize and run a commercial cattle program.

Charolais – Champion of the World

Farm: Elder Charolais Farms
Animal: Elder’s Blackjack 788B
Animal Owned By: Elder Charolais & Wilgenbusch Charolais
Breed: Charolais
Category: Charolais – Champion of the World
Country: Canada
Bio: Elder Charolais is a family run 4th generation business in south central Saskatchewan just north of the Montana border. Our slogan is simple “Return on your investment”. We pride ourselves in putting bulls into the commercial and purebred industry with this in mind. Semen has been sold globally as well as high quality females sell every year at various events in Canada.

Farm: Sunnybrook Farms
Animal: Sunnybrook Jade
Animal Owned By: Terry & Julie Willis
Breed: Galloway
Category: Galloway – Miss World
Country: USA
Bio: Sunnybrook Farms is located in Belvidere, Illinois and owned by the Terry, Julie, Chris & Steve Willis. The farm is based around 25 proven Belted Galloway females with genetics in all 50 states. They have strived to build pedigrees over generations to consistently produce cattle that are functional and correct with adequate bone and muscle. Their motto “We don’t breed show cattle, we show breeding cattle” is very important.

Galloway – Champion of the World

Hereford – Champion of the World

Farm: La Rhone Limousins
Animal: La Rhone Hullabaloo
Animal Owned By: AJ du Toit
Breed: Limousin
Category: Limousin – Miss World
Country: South Africa
Bio: La Rhone Limousins was established in 2003 by Andre du Toit. The stud is run on the du Toit family’s farm, La Rhone, in the Tulbagh valley, Western Cape South Africa. Their main aim is to breed well balanced, medium framed beef animals that can produce under extensive Southern African conditions. Their genetics have a proud footprint in all 9 provinces of SA as well as 5 different countries. They have great interest for our genetics fom other parts of the world but due to FMD protocols they may not export to most major cattlebreeding countries.

Limousin – Champion of the World

ORB – Champion of the World (Gelbvieh)

Shorthorn – Champion of the World

Farm: G L Riby & Son
Animal: Stonehills No Limits (P)
Animal Owned By: Geoff & Christopher Riby
Breed: Shorthorn
Category: Shorthorn – Champion of the World
Country: UK
Bio: Stonehills Shorthorns is part of a family run, mixed farming operation located in Fraisthorpe, East Yorkshire. Stonehills Shorthorns was established in 2004 by Geoff and Christopher when they sold their dairy cows and were looking for a modern, functional, suckler cow. We have had great success in the show and sale ring, some highlights include our senior stock bull Elliot Bodacious winning the World Congress at the RHS in 2010, Stonehills Foxy Foxy winning the first UK Beef Shorthorn Championship at GYS in 2014 and selling Stonehills X Factor to the late Donald Biggar of the Chapleton Herd for 7,500gns. We are thrilled that Stonehills No Limits has won Shorthorn Champion of the World – we believe he is a fine example of the direction beef shorthorns should be travelling in.

Farm: Valley Creek Simmentals
Animal: Valley Creek Jewel
Animal Owned By: Stuart & Samantha Moeck
Breed: Simmental
Category: Simmental – Miss World
Country: Australia
Bio: VC Simmentals is located at Binda NSW, Australia & is well known through the beef industry as been at the forefront of the Simmental Seedstock Business. The stud was established by Stuart Moeck in 1999, Stuart & Samantha Moeck have successfully won many board ribbons at Royal Events. We are thrilled that Valley Creek Jewel was crowned “Simmental – Miss World”

Simmental – Champion of the World

Farm: Koelfontein Estate
Animal: Koelfontein Prince KFN1723
Animal Owned By: Handri Conradie
Breed: Simmental
Category: Simmental – Champion of the World
Country: South Africa
Bio: Koelfontein has been the proud heritage of 7 generations of the Conradie Family. Fruit farming is our core business. Our pears, apples, peaches, apricots and nectarines are sold locally and internationally, fresh as well as sun-dried. Our Simmentaler stud was founded in 1980. In 2016 we bought Leeupoort Bismarck. Prince was the very first calf sired by Bismarck and became 2020 Simmental COTW.

Speckle Park – Champion of the World

Farm: Maungahina
Animal: Maungahina Premier P203
Animal Owned By: Mark McKenzie
Breed: Speckle Park
Category: Speckle Park – Champion of the World
Country: New Zealand
Bio: Maungahina Stud was established in 1907 being the oldest Hereford Stud in New Zealand. Also, the oldest private on-farm auction in Australasia, having the 76th sale this year. Now Maungahina is managed by Mark & Melissa McKenzie, being the 5th generation on the farm. They have two on-farm bull sales; a 2yr sale in June and a yearling sale in late September with 150 bulls sold annually being both Herefords and Speckle Park.

Speckle Park were established at Maungahina in 2007, being the first to introduce them into New Zealand, with 250 head of Speckle Park cattle now. Highlights are world record price for semen $5,150 per straw for Maungahina Legacy and world record price for embryos of $6,500 per embryo, again sired by Maungahina Legacy, in both the 2020 and 2021 bull sales. Holding the New Zealand record for a Speckle Park bull sold for $35,000. They also introduced Speckle Park into the dairy industry here in New Zealand and now they are the second biggest AB breed in New Zealand. They are currently contracted to LIC selling semen and this year will reach 45,000 straws, which is growing 20% each year.

The goal when Maungahina was first established in 1907 was the same as it is today “To breed and sell quality genetics that stand the test of time, yield high returns and dominate in our client’s breeding program.”